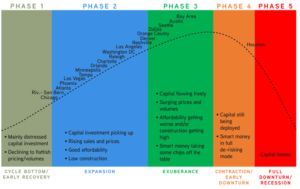 “Raleigh is one of the Southeast markets that a lot of builders entered and scaled up on during this recovery, which is why we have it a bit higher than Charlotte and much higher than Atlanta,” says Rick Palacios Jr., director of research at John Burns Real Estate Consulting.  Home values in Raleigh, he says, are already 13 percent above their prior peak, whereas in Atlanta home values are still about 1 percent below its market peak. Charlotte home values are about 8 percent above market peak, whereas the new home market in Nashville, Tennessee, has been “growing gangbusters” with home values 28 percent above prior peak, Palacios says.  The report shows that about a dozen of the largest new home markets, including all that were mentioned above, are in what Palacios describes as “phase 2” or expansion phase of a five-phase housing cycle: Capital investment is picking up, homes sales and prices are rising, there’s good affordability and moderate construction.

“Many of our clients today are laser-focused on these geographies, continuously adding to their investments in these markets,” Palacious wrote, noting also that investment risk remains fairly muted. “Job growth has come back nicely, with the lion’s share of expansion markets recovering all of the jobs lost during the Great Recession.”