Raleigh leads the mid-Atlantic states in terms of population growth in the next 25 years, according to projections issued Tuesday by American City Business Journals, the parent company of Triangle Business Journal.

The Raleigh metro is expected to have almost 2.2 million residents by 2040, up 72 percent from its current 1.27 million base. That would place the metro as the 35th largest metropolitan area in the country in 25 years. Raleigh currently is the 44th largest metro in the U.S. In raw population terms, the Charlotte metro is expected to grow more by 2040 (by 1.9 million residents) but the percentage growth is only 49 percent — because of its current 2.42 million population base.  Raleigh’s meteoric percentage increase in population growth places the metro as the third-fastest growing metro in the next 25 years behind Austin, Texas, and Cape-Coral-Fort Myers, Florida, according to the newly released report. 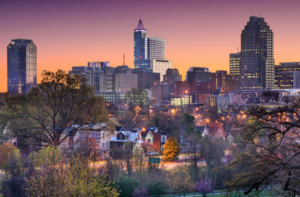