What’s the latest hipster trend? According to one real estate company, it’s profiting from the housing markets in their havens. 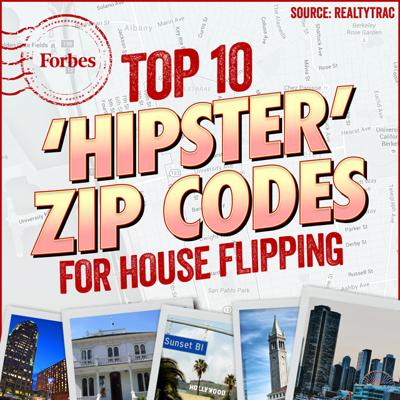 The California-based company analyzed zip codes with high incidence of home flips — property sold twice in 12 months — that also met criteria it deemed important to the trendy demographic: percentage of young people in the population, and accessibility to public transportation.

Zip codes in major cities like Los Angeles and Seattle ranked high on the list, but there were also smaller cities that were profitable. Based on RealtyTrac’s data, Philadelphia is probably the hippest, most profitable city to flip a home in America. There were a total of 412 home flips in the five Philadelphia zip codes featured in RealtyTrac’s list. They posted an average return on investment of 123.82%. However, none of the zips in the city had a median gross profit high enough to land it in the top 10.

Each zip code in the ranking had: at least 10 homes flipped in 2015; an average return on investment of at least 50%; a boost in population from 2013 to 2014; at least 25% of the population between the ages of 20 and 34; and at least 20% of the inhabitants walk or use public transportation to get to work. They arrived at the list based on census data and their own findings.

There are several ways to deem which zip codes were the most profitable, but for the sake of convenience, FORBES has ranked them by median gross profit.

Although the list’s target demographic skews young, it’s probably worth pointing out that Millennials as a whole are putting off buying homes. People under the age of 35 made up just 34.8% of American homeowners in the second quarter of 2015. Analysis by real estate site Zillow in 2014 suggested that the reason that generation lags behind in homeownership is because they are putting off marriage, and thus the benefit of dual income streams.

Here’s how the cities break down by zip code: